Food and fun at the Viking Diner 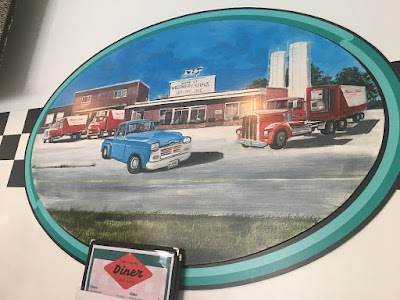 Last Wednesday, I paid my first visit to the Viking Diner. It is a new restaurant on Grand Island, having opened in February. Unfortunately, by mid-March, everything shut down, and most of us had to wait for months before we could enjoy such new treasures as the Viking Diner. 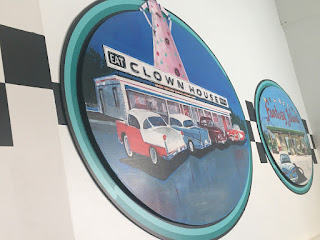 The Viking Diner occupies the space that was formerly occupied by McMahon's Family Restaurant. Back in the more distant past, a place called the Clown House occupied that spot. It had a very distinctive appearance and people who visited the Clown House apparently never forgot those visits. In fact, each restaurant that occupied that space on Grand Island Boulevard had a distinctive appearance, and the Viking Diner is no exception. It is full of handpainted images of that location through the years, which tells a story to remind long term residents of the past that they loved and to give a visual history to those who did not experience the earlier incarnations of the restaurant.
On the day that I visited, with two others (Amy and Mary), the special dish being offered was chicken pot pie. It turned out that September 23rd was the National Great American Pot Pie Day. Who knew? We sat at a booth, in true diner style, and we all happily ordered chicken pot pie.
So, Amy, Mary, and I celebrated the National Great American Pot Pie Day in style, 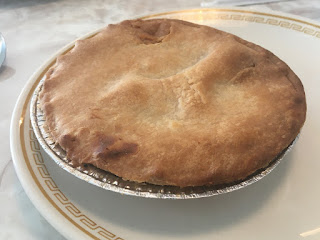 with our individual chicken pot pies. We also had salads. 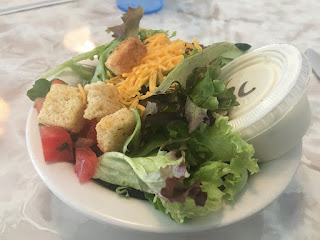 The salad was full of field greens and a nice selection of vegetables. The pot pie was full of large chunks of chicken, as well as carrots and peas. It was very filling, and I took more than half of my pot pie home. 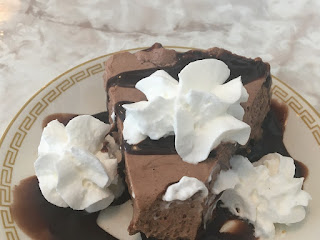 I had enough leftover pot pie for two more meals. 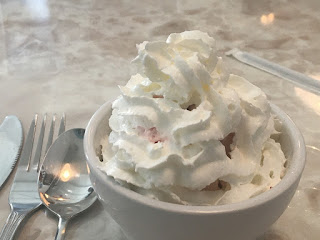 We finished the meal with sweet treats.

Visiting the Viking Diner was a fun experience. The ambience was cheerful and colorful, the service was friendly, and the food was delicious. The restaurant itself, located at 1849 Grand Island Boulevard, is open every day except for Mondays.

I am IN for the next visit Alice. don't wait for me though. I live in Brisbane Qld Australia.

I'll ask for directions when I get to New York!

The food looks so deliciously old-school.

Oh my, that pot pie looks delicious! Oh course you know I think the same about the desserts! Sounds like you all had a wonderful visit.

Alice, I've missed your posts, and this one is delectable. Thank you! Looking forward to seeing more of your images and observations.

I am always up for a good chicken pot pie. Not sure about the desserts but it looks like it would be a nice place to visit for a meal.

I love, love, love your blog. You write so well and so conversationally, I find myself answering your rhetorical questions and waiting for your "Alice Dance".

I am down to try the Viking Diner anytime. It sounds like exactly the kind of food one needs in a Fall Pandemic...homely, hearty and food we shouldn't indulge in too often. Mm mm Yum!

Well neighbor, your blog has now been added my list of reasons I am enjoying getting to know you despite you conspiring to alienate Rudy's affection...you femme fatale!

I hope you enjoy the book, Deb

PS:"Good thing I'm not a robot, talk about setting back progress!"

I'm not a diner person, but you certainly made visiting the Viking Diner sound enticing. 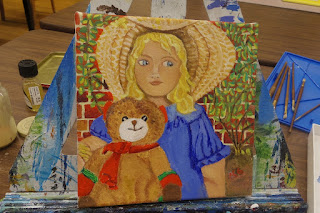