The magic of cats


It's true confession time. I haven't posted as much as I had hoped during this blogging challenge. But that's all right. It's still November, and, as long as I make an effort, it's going to be okay. 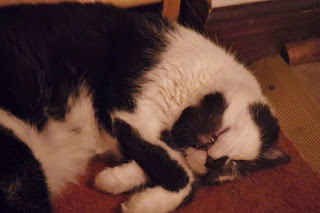 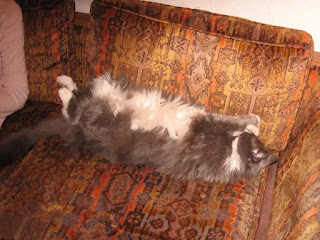 And I was okay with that decision.

Until Lucy came along. Lucy was the beloved tabby cat belonging to a couple who lived just down the hall from me. 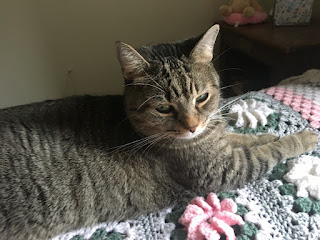 She had everything that a cat could want. She had humans who doted on her and she even had a dog friend, who came to visit her. And then, for Lucy, it all fell apart. Her mommy went to a nursing home, and, a few months later, her daddy passed away. That was when I was asked to foster Lucy.

When Lucy first came, she was stressed by being abruptly taken from the only home that she had ever known. She growled and hissed furiously and she tried to run back to the apartment door that used to open and let her in when she snuck past her human.

Fast forward four months. Lucy was able to purr and run and jump in the apartment. But, as soon as the door opened, she made a beeline for her former home. She had not forgotten. Nor was she close to healing from her loss. She was taken to another foster home, where she could run up and down the stairs. She had windows to the world. She was taken on trips out of town, and she regained the happiness that she used to have.

Today was Lucy's Big Day. She was adopted by a family. She is now a happy, well-adjusted cat. She is at home, surrounded by love. I am so happy for this sweet girl.

When Lucy went to another foster home, I got another cat to foster. 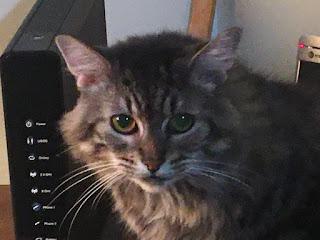 The cat that came to me was Trinity. She is a Maine coon cat, approximately ten years old, who had endured some really horrifying experiences that neither human nor cat should ever have to endure. Trinity had some health issues after she moved here with me. She suffers from pica, which is a condition that causes its sufferer to eat nonfood substances. 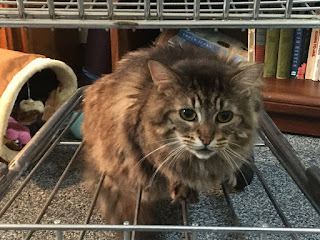 For Trinity, the nonfood substance was cat litter. Fortunately, Mel from Forgotten Felines of Western New York took Trinity to the vet, where she was diagnosed and treated. When we discovered that gorgeous Trinity was eating cat litter, we replaced the clay litter with litter made from wood chips and wheat. 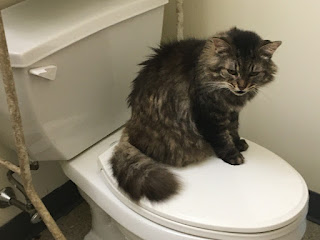 For weeks, she decided that the closed toilet would be a nice cat bed. She wasn't very happy when I placed her on the floor so I could use the bathroom. I thought that the toilet looked like an uncomfortable bed, but Trinity had other ideas. 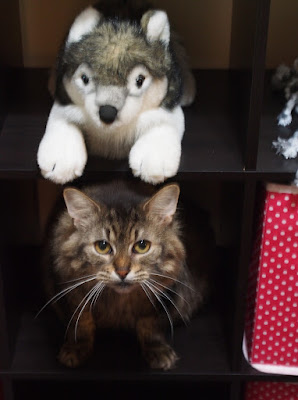 Then, for a while, she spent her time in a little cubby in my living room. And now, she is living in a kitchen cupboard. It is her little furnished apartment. Well, it has a rug. It doesn't have any furniture. She is happy to come out to meow for food, to relax in the kitchen, to eat from her food bowl, and to visit the litter box. 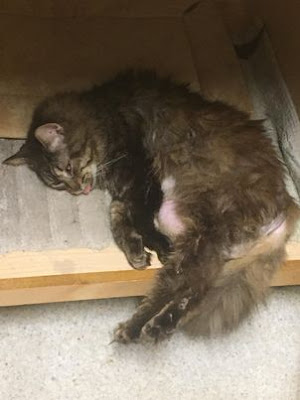 Despite, or maybe because of, Trinity's quirkiness, I fell madly in love with her. I also was ready to let go of my heartbreak at losing my precious Smokey and Zoey. I felt as if those two cats, as well as my parents, were telling me that the best way for me to remember them is to love Trinity.

And so, Trinity is the foster failure. I am adopting this girl. I confess that Trinity has opened up a space in my heart that I didn't think that I had anymore. Welcome to the family, sweet cat.

Oh, I love your story, Alice! And the cats., of course. I'm glad Trinity have a home with you.

Such a heartwarming story Alice.. and welcome to Trinity..

The magic of cats 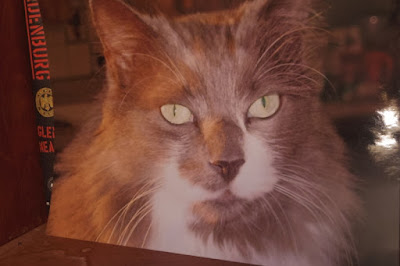