Bringing history to the community... 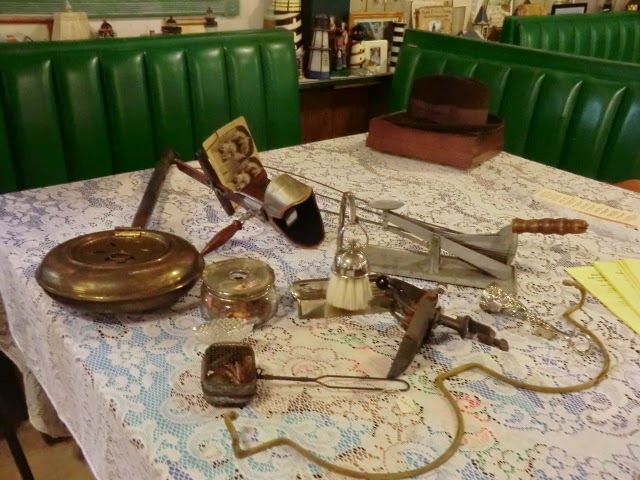 Curt Nestark brought a variety of historical objects to the Lions Club meeting. There was a story behind each object.

The Grand Island Lions Club asked the Grand Island Historical Society for a presentation on local history at its November meeting, which was held on Wednesday, November 12th. At the October Board of Trustees meeting, it was decided that Curt Nestark, our fearless president, would do the presentation and that I would be the assistant. The assistant's job is mainly to carry boxes, unpack boxes, set up the display and, later on, repack the boxes, and carry all materials back to Curt's truck. Notice that I said "truck." That is for Curt's benefit because, at various times, I misspoke and referred to Curt's vehicle as a lowly "car." I am not to say "CAR," when I mean "TRUCK." Because I have three sisters and no brothers, Curt and I decided that, while I was growing up, I missed on the most entertaining part of life... a big brother. Hence, Curt became my "adopted" big brother. And, I must say, he has truly acted his role. So have I. People tell us that we really do act like brother and sister.

But I digress. Back to the Lions Club. No. Not the tigers or the bears. Just Lions. The Lions Club is well known for helping blind people get things that they need, such as canes and eye glasses. They also provide a number of other services for persons with disabilities, including getting large print books for the library and helping people who are financially challenged with eye exams, eyeglasses, hearing aids, wheelchairs, walkers, canes, and other mobility aids. Their biggest project is the annual Special Kids day picnic, which is held during the summer at the Buffalo Launch Club in Grand Island. Several hundred kids and their teachers and aides come, and the kids have a great time on land and on boats. The volunteers have fun watching the kids having fun. I know that because, last year, I was one of the volunteers, and it was fun.

The meeting was held at McMahon's Family Restaurant. This is an historical building because it used to house a place called the "Clown House." Alas, I have no memory of the Clown House but I would have liked to have gone to a house that was full of clowns.

The program that Curt decided to present was to display a bunch of items that were common about one hundred years ago but are now no longer used too often. Then he asked the Lions to identify the objects. Notice that I capitalized Lions. That is because they are members of the Lions Club and not wild animals that tend to roar a lot.

Curt and I arrived at  McMahon's Family Restaurant at about six o'clock.

I love looking at historical pieces because it interests me that they all have many stories to tell. :) 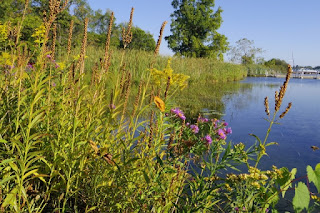